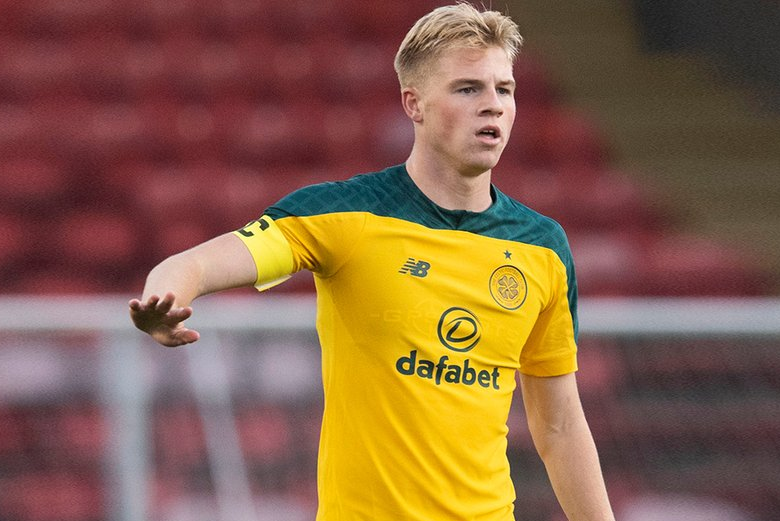 One name that cropped up in the midst of the 19/20 SPFL season was that of Stephen Welsh, highly-rated Celtic FC academy graduate and modern day ball-playing centre back. John Woods took a look deeper into what makes Stephen such an exciting prospect for the future.

Welsh, 20, is from Coatbridge and has spent many years in the Celtic Academy, signing his first professional contract in 2016 – a deal that saw him commit to Celtic until 2019.

In the 18/19 season, Welsh won the Glasgow Cup as part of the Celtic reserve team who defeated Rangers 3-2 in the dramatic final at their home stadium, Celtic Park.

Soon after, he moved to Morton on loan – a good opportunity for vital minutes of experience.

Under the management of ex-Chelsea player David Hopkin, Welsh made 18 appearances before the loan being cut short to bring him back to Celtic.

In his months at Morton, Welsh featured at both right-back and centre-back in a mixture of formations that included back threes and fours. However, Celtic predominantly see him as a centre-half despite Welsh admitting: “I’m happy to play anywhere because it will make me a more versatile player for the future and it can be something I have up my sleeve when I go back to Celtic”.

Welsh’s willingness to develop his game and learn as much about his role on the pitch, coupled with his excellent reading of the match, is what makes Celtic coaches believe in his potential.

His keenness to get on the ball, and his comfort with it at his feet, makes him the ideal player for any modern day team. Importantly, alongside these attributes, Welsh also loves a tackle and has excellent defensive awareness.

The blond-haired defender has also had the opportunity to showcase his talents on the international stage, as he has represented Scotland at both under-17 and under-19 level and undoubtedly will make the step up to the under-21s very  soon.

With 21 Scotland age-grade appearances, it is clear that Welsh is a talent, but his real breakthrough into the football world was his competitive debut that fell against Hamilton on 2nd February, 2020.

Welsh was recalled from his loan spell to Cappielow due to an injury to Celtic defender Jozo Simunovic, and promptly started the fixture against Hamilton – which finished 4-1 to the Celts.

He played a total of 76 minutes before being replaced by Tom Rogic. Despite not finishing the game, Welsh won over the Celtic support with one fan (@mel9samaras on twitter) saying:

“Thought Stephen Welsh was excellent today. Looked the most composed of all the defenders.”

Now contracted with the Hoops until at least 2023, Welsh has impressed in Celtic’s pre-season tour of France and will no doubt be hoping his name crops up on the team sheet many more times throughout the coming season.

Keep your eyes peeled as Welsh is assuredly one for the future and a name we will be seeing far more often in the coming few seasons.