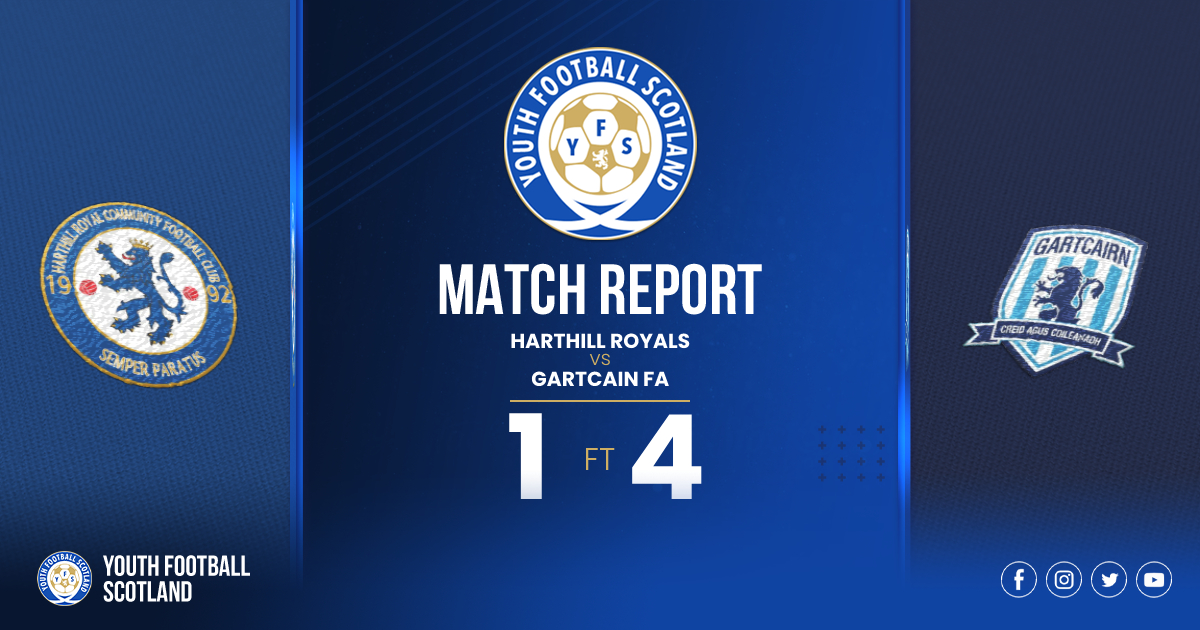 Gartcairn FA put in a convincing display as they put four past Harthill Royals in Thursday’s WLAYFC U14’s League B match at Gibbshill Park.

The first half was a very quiet affair with not much to report on in the early stages, with both sides having no clear-cut chances at either end of the park. The first real chance came from the hosts, with Leighton Roney’s shot being comfortably saved by Shay Reilly. As the half continued, both teams had an even share of possession with both sets of defenders keeping their opposing attackers at bay.

However, just before the interval, Royals’ keeper Lewis Brown made a wonder save, as a Gartcairn player managed to dribble around the Harthill defenders and find space in the box. Only for his strike to be denied by Brown’s fingertips as the ball hit the post.  The whistle then blew for the break, with neither team taking up much opportunity to score in a first half that was crying for goals.

The second half commenced, with the visitors coming out the traps with an early chance falling to Raithin Conn, however, his shot just outside the box was comfortably saved by Brown. Both teams continued their good defence work from the first half, however with Gartcairn slowly picking up more possession, an opening goal looked imminent.

As was soon the case, the visitors opened the scoring ten minutes into the second half as a momentarily lapse in concentration from the home side allowed McKenzie McEwan to find space in the box. From a tight area he managed to place the ball into the bottom right corner of the net, giving Gartcairn the lead.

The attacking prowess of the Gartcairn   squad then began to show as the match continued with Harthill finding themselves pinned in their own box, as the away side began to build up in confidence.

As the second half reached the halfway point, Gartcairn increased their foothold in the game with another goal. Cody Rolink pushed himself up the park and showed skill to catch opposition keeper Brown unaware, which left him with plenty space to strike the ball into an empty net.

There was then to be three goals in the last ten minutes of the match as the away side ensured all three points, with both Gartcairn’s goals scored in quick succession.

Taylor Shaw’s powerful run proved too strong for Harthill defenders as his strike rippled the top of the net.

The last goal for the winning visitors came from Luke Kelly, who found a narrow space on the edge of the box and poked the ball   into the bottom right-hand corner.

However, for Harthill, there was a small ray of light in the dying minutes of the match. Harry Love’s strike from a few yards out hit the back of the net, in what was only a consolidation in  a tough evening  for the hosts.

Next up, Gartcairn continue their fine start to the season this weekend with a home game against a Whitburn side directly above them in second spot in the table. Harthill are away to an East Calder team who are also near the foot of the table.

It would have to be their keeper Lewis Brown’s save in the first half which ensured that the match remained at nil-nil but also kept at bay a Gartcairn squad who have several attacking players at their disposal.

It would have to be their first goal, courtesy of McKenzie McEwan, his  strike opened the scoring during an  entertaining match. However, most importantly it served as the catalyst for the away side’s romp to victory.

Harry Love. His goal was the best of the match, with a powerful strike which caught an otherwise sharp Gartcairn defence with their tails between their legs.  It also brought some cheer for a home team who endured a tough evening.

Cody Rolink. His goal, which was the second  for the visitors was on the spot in terms of technical ability having been able to score straight in an empty net, as well as taking part in a strong team- performance.