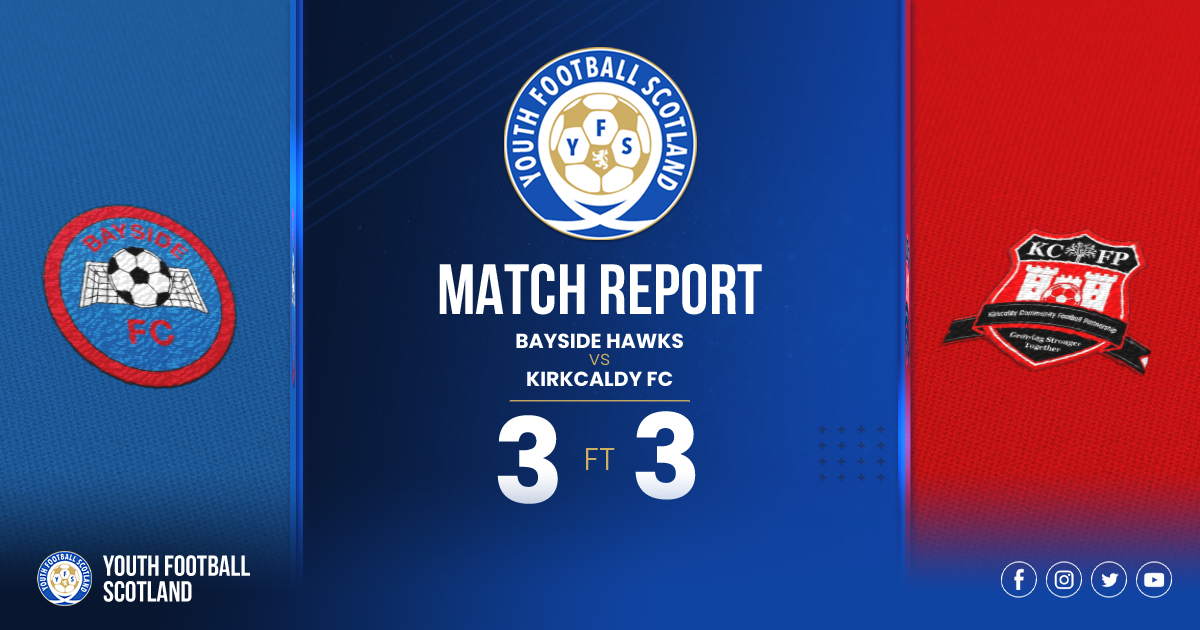 In an end-to-end affair, Bayside Hawks U13s and Kirkcaldy FC U13s both came back from behind to end the game in an entertaining draw. Braces from Robbi McGregor and Dan Cowan helped their respective teams to a draw on their return to league football.

Kirkcaldy started the first fifteen minutes extremely well with the first goal coming after a slack pass in defence, led to Cowan picking up the ball around twelve yards out and slotting it low past the keeper.

Just minutes later, they doubled their advantage as Cowan got his second when he combined with midfielder, McLaren, who played a brilliant through ball into the path of the striker who showed great composure before placing the ball into the back of the net to get his second of the match.

It was an uphill battle for Bayside to come back from this two-goal deficit, but they did not go down without a fight. With having most of the possession as the half went on, it enabled them to create a few chances to try and open their account, but the Kirkcaldy keeper, Haig, stayed resilient. Kirkcaldy also had a few chances to get a third but the Bayside keeper, Buchanan, made two very good high saves to deny Kirkcaldy to extend their lead.

Just seconds before half-time, McGregor got a goal back for his side after driving towards the Kirkcaldy defence and finishing past Haig to give his side a chance to get that equaliser in the second half. With the tactical change from Bayside with pushing McGregor further forward in midfield, the change was evidently an effective one.

Going into the second half, Bayside were pressuring the Kirkcaldy defence as they were trying their hardest to get that equaliser, with the best chances coming from Owen McGovern and Reilly Tod whose shots went just over the bar as well as McGregor who had a free kick which struck the bar from distance.

After persistently pushing for the equaliser, Bayside got it through Lachlan Tod. Tod smashed the ball home from the edge of the box to set up a thrilling end to the match.

After Bayside got their equaliser, they then took the lead in miraculous fashion. The home side won a corner with McGregor going over to take. The midfielder swung in the ball to the back post, over every Kirkcaldy defender as well as the keeper, and over the goal line to but Bayside ahead in style.

Bayside did not stop there when it came to creating chances as McGregor had a great opportunity to seal his hat-trick as well as Reilly Tod’s high shot, but Haig did very well to deny Bayside extending their lead.

Then, with the last kick of the game, Kirkcaldy’s Ryan Morgan equalised from close range after a well-worked move down the right was cut back to Morgan at the edge of the box and he made no mistake to earn a draw for his team.

When looking at the game as a whole, it was clear that Kirkcaldy were a very good attacking team, with bags of skill and were clinical when given an opportunity in front of goal. As for the home team, Bayside impressed in midfield, were very dangerous on a counter-attack and it was obvious that the tactical changes made by the coaches evidently worked a treat.

Bayside Magic Moment
The home side turned the match on its head within minutes and McGregor’s corner was a stunning moment.

Kirkcaldy Magic Moment
The last gasp equaliser from Morgan delighted the away team and demonstrated their never say die attitude.

Bayside Star Player
My player of the match for Bayside was Robbi McGregor. He stood out as a key figure in midfield and provided a real threat when running at the Kirkcaldy defence, with also bagging himself two impressive goals. My magic moment for Bayside also came from McGregor whose goal straight from a corner was a unique but fantastic finish.

Kirkcaldy Star Player
My player of the match for Kirkcaldy was goalkeeper, John Haig. John made several very impressive saves with having to at times, save with strong hands to deny the Bayside attack from adding to their goal tally. My magic moment for Kirkcaldy was Cowan’s second goal who showed great skill and composure to finish past Haig into the bottom corner.