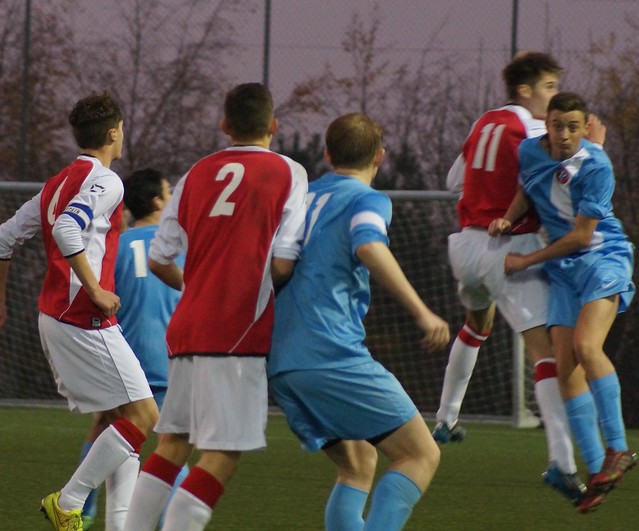 A.C Oxgangs are in the the hat for the third round draw of the David Murray Cup after over coming Spartans 4-0 who were reduced to ten men for the last 37min of the game.

A controversial sending off in the second half certainly ended what was a very competitive cup tie as a contest.

Spartans came out of the traps the quickest and Aaron Murrell tested Andrew Dunnett but the keeper saved well with his feet and then was alert to collect the loose ball.

Next it was Oxgangs who created a good opportunity when Paul Macari played in Murray Cockburn who blasted well over the bar.

Spartans Peter Wood played in Murrell who forced Dunnett into a good save from 25 yards. Murrell was then involved in Spartans next chance whenhis shot from the right hand side was deflected for a corner. The resulting corner was played in and Syska directed his header just over the bar.

It was very much a game of cat and mouse as both sides tried to suss each other outin the early stages.

Oxgangs were awarded a free kick for a push in the back by Ben Lovie. Isaac Thomson stepped up from around 25 yards but his effort went wide of the left hand post.

Spartans wood drove in from the left hand side but his shot was well saved by Dunnett at the near post.

The visitors then should have taken advantage of slack defending when Danny Cameron played a ball right across the font of goal which saw the Oxgangs players stand ball watching but more importantly for the home side the Spartans forwards did the same.

Oxgangs created a couple of chances when Cockburn went on a run down the right, cut inside but his shot found the side netting and then Thomson tested Blair Lawson in the Spartans goal when he got down well to save at the near post.

The men from Ainslie Park were playing the ball out from the back and and this led to a chance for the eye catching Wood's who after a good move from the back through midfield picked up the ball. Wood's then drove into goal down the left hand side of the Oxgangs box and easily could have went down when he was clearly fouled but managed to stay on his feet and get his shot away which Dunnett collected at the second attempt.

All credit to Wood's for staying on his feet when it was easy to go down and get what would have been a stone wall penalty and probably a straight red card for the Oxgangs man.

Spartan then came close again when a very optimistic effort 30 yards out by Murrell who seemed to be on the end of most things for Spartans came off the bottom of the left hand post. Thirty minutes gone in the half and the best chance of the game fell to Spartans when Cameron found himself in the box but blasted over from 6 yards out when it looked easier to score.

A very competitive half with nothing really between the sides saw the deadlock broken with five minutes to half time. Thomson played the ball into Tom Embleton who then played him the ball back and his cross was met at the back post by the head of Cockburn to score from a yard out to give the home side a rather unexpected lead going into half time. 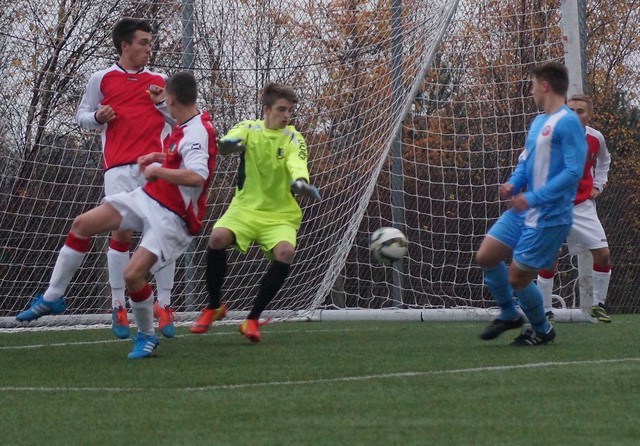 Oxgangs got the second half underway and it was Spartans who started the quicker with Cameron going for the bicycle kick finish which would have been spectacular if it had come off but his attempt failed to make contact with the ball and then Jamie Cairns stung the fingers of Dunnett who could only punch his fierce drive clear.

The real turning point came in the 53rd minute when Spartans Ben Lovie brought down Lewis Temple 20 yards out. Lovie and his team mates looked shocked when the referee produced a straight red card for denying a clear goal scoring opportunity which seemed a bit harsh as there were plenty of bodies between Temple and the goal.

Spartans now down to ten men had to defend against the Oxgangs free kick in a central position 20 yards out. Cockburn took responsibility but blasted his kick over the bar.

Murrell came close to getting Spartans back on level terms when he lobed Dunnett but saw his delicate touch just go agonizingly over the bar. Lee Horribine then tried his luck when he found himself up field but his shot flew high over the bar.

Oxgangs found themselves on the end of two very tight off side decisions when firstly Cockburn was flagged off when it looked like he had timed his run perfectly and then after Cockburn played in Jamie Hamilton he suffered the same fate which did not go down well with Cockburn who was booked for his remonstration towards the man in the middle.

Spartans were coping well with the one man deficit and were working hard and knew the next goal was going to be pivotal in this match for both teams. This proved the case when Paul Macari won a corner for Oxgangs when his shot was deflected by Max Ketchen.

Temple played in a in-swinging corner with his left foot which saw the ball evaded everyone and end up in the back of the net doubling the home sides advantage with 63 minutes gone.

Oxgangs came close to increasing their lead when Cockburn corner hit the top of the bar and then Hamilton hit the side netting with his shot from the left hand side of the box. The home side were in control now and Spartans were looking tired as the one man disadvantage was taking its toll and Oxgangs were using the extra man to wear Spartans down.

Any luck Spartans did have truly deserted them when on 73 minutes the ball was played into their box and Ketchen was unfortunate to see his scuffed clearance rifle into the back of his own net.

Spartans kept plugging away and were not going to roll over and the introduction of the lively Azad Okan seemed to lift Spartans. Wood came close when his header went just wide of the left hand post then Ketchen tried to make amends for his unfortunate own goal but Dunnett saved comfortably.

Hamilton who had replaced Macari for Oxgangs was demonstrating his electric pace since he came on and this paid off with five minutes to go when he picked the ball up on the right hand side and sprinted into the box and unleashed a powerful shot into the top far corner to put the game well and truly beyond their plucky opponents.

Hamilton nearly got himself a second minutes after scoring with a near replica of his first but this time his shot went just wide of the far post and should have scored right at the death when he used his amazing speed to latch onto a through ball but one on one with Lawson he blasted wildly over from 15 yards out.

A.C Oxgangs now await to see who they draw in the next round.

A.C. Oxgangs
Spartans FC
1. Andrew Dunnett
2. Tom Embleton
3. Campbell Stephen
4. Sam Philp
5. Sam Leslie
6. Isaac Thomson
7. Lewis Temple
8. Neil Middleton
9. Murray Cockburn
10. Paul Macari
11. Callum Berwick
12. Jamie Hamilton
14. Elliot Sked
15. Mathew Gray
16. Harvey Blackie
17. Jack Montgomery
1. Blair Lawson
2. Keiron Hunter
3. Max Ketchen
4. Lee Horribine
5. Ben Lovie
6. Severyn Syska
7. Peter Wood
8. David Fayks
9. Jamie Cairns
10. Danny Cameron
11. Aaron Murrell
12. Steven Havelin
14.Saif Qadir
15. Azad Okan
Star Player
A.C. Oxgangs
Spartans FC
Isaac Thomson worked hard all day and always tried to create something every time he was on the ball.
Peter Wood was the stand out for Spartans and showed he had a great engine going forward and created chances with his crosses but also worked back when required. Unlucky not to get on the score sheet.
Magic Moment
A.C. Oxgangs
Spartans FC
Jamie Hamilton's electric pace to get onto the through ball in the dying minutes of the game.
Danny Cameron's attempt at a bicycle kick which would have been spectacular if it had come off.
Club Views
A.C. Oxgangs
Spartans FC
Ross Anderson, coach of A.C Oxgangs, said: "First half was a very tough game, pretty competitive. We could not get settled into the game and that's credit to Spartans who were on top of us from the start. I thought we were fortunate to go in winning at half time and thought Spartans should have been a couple up. Second half we started better. The Second goal was helpful and the sending off should have killed the game but it seemed to lift them up for the next ten minutes. Soon as we got the third goal we were in total control and started to pass and move the ball and they got tired. A good result in the end. "
Tweet
Published in South East Region
Tagged under