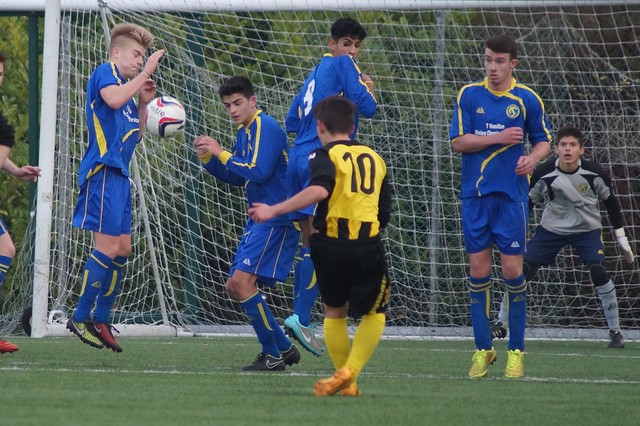 Inverkeithing Hillfield Swifts moved above Hutchison Vale Fc in the Division 1 league table after a fine 5-3 win in the first meeting between the pair this season.

A 4-0 half time lead compliments of a double from Healy with McGuire and Francis chipping in with one a piece putting the home team firmly in the driving seat of this fixture. Hutchie replied with goals from Forrest, Williamson and Mitchell in the second half with Healy completing his well deserved hat-trick.

Hillfield got this game underway and the first real chance of the game with only five minutes gone when Hutchie captain Dean Robertson unleashed a 30 yard pile driver which Scott Page had to be alert to tip over the bar for a corner.

Hutchie started the brighter and it was Jonathan Grotlin who created the next chance for the visitors but blasted his shot high over the bar after creating a good shooting opportunity down the right hand side. This was followed by a half chance when after a long ball played forward caused bit of a mix up between the Hillfield keeper James Donaldson and one his defenders and luckily for Hillfield Mitchell just could not take advantage of the error.

Craig Williamson was next to threaten the Hillfield goal after driving down the left hand side he struck a powerful shot from just outside the box with Donaldson tipping over the bar for a corner.

Hillfield's first real flurry forward came when Ryan Barry picked up the ball and drove at the Hutchie goal but a super tackle by Daniel Smith halted him in his tracks just outside the 18 yard box.

Mohammed Asam put himself under pressure for the rest of the game when he picked up a silly yellow card with only nine minutes played.

The team from over the water started to get their game going and created a couple of half chances for Scott Russell and Daryl Healy and this gave the home team belief and Broadie Hamilton certainly showed this when he tried his luck with a 35 yard strike but Page collected with no problem.

William Kerr thought he had a penalty claim when he ventured into the Hillfield box and had his shirt pulled but the referee played advantage and Kerr got his shot away which was spilled by Donaldson which then fortunately came of one of his players and back into his grasp.

This game was being played at a hectic pace and the next opportunity came for the home side when a corner played in by Blair Springhall saw Hamilton's effort go just wide of the right hand post.

Both sides number sixes had good opportunities when firstly Robertson put his chance high over the bar after driving into the box for Hutchie then Aidan McGuire put his shot just wide off the left hand post for Hillfield.

The Hillfield players were growing in confidence and again tested their opponents defense when a corner by Barry was cleared for a corner and a low driven ball from the resulting corner by Hamilton saw the ball hurriedly cleared at the near post.

Hillfield were in ascendancy and were creating the better chances with Healy testing the keeper but he saved well in the center of his goal.

Healy's next chance was to bring the break through in this game when on 25 minutes he latched onto a long ball and drove into the box to see his initial shot come of the keeper but latched onto the loose ball and rounded the despairing keeper and slotted home from a tight angle to give his team a deserved lead.

Ryan Hutchison and Smith both showed their defensive qualities for Hutchie when they stopped efforts from Russell and the hard working Healy.

Hillfield were hungry for more goals before half time and John Francis's 25 yard drive was tipped round the post by Page for a corner. The resulting corner saw a delightful ball played in which was met by McGuire who finished low into the left hand corner and although Page did get a hand to it he could not divert the powerful shot from only six yards out to see the home side double their advantage on 37 minutes.

Two minutes later Hillfield were awarded a free kick just to the right side of the goal and from 22 yards out Francis stepped up and found the top left hand corner which was greeted with mass celebration by the home side players and coaching staff.

With only two minutes to half time things got even better for Hillfield when Hutchie fell further behind after Barry played in a good cross and the ever dangerous Healy met the ball on the half volley and found the right hand corner to go in at half time 4-0 up after scoring three goals in a six minute spell. 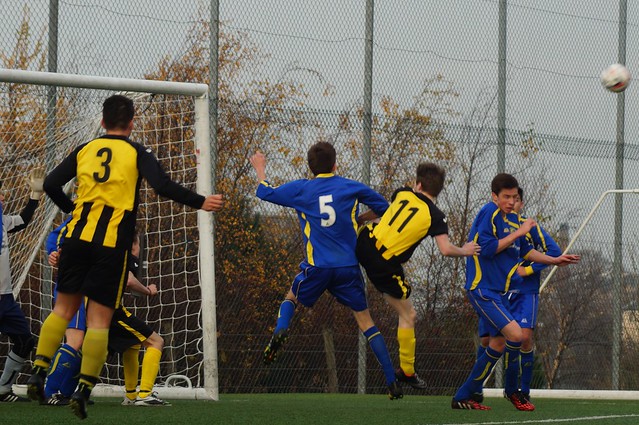 Hutchie had a massive task in front of the them to get back into this game and Hillfield was not going to make it easy for them and started the second half as they finished the first on the attack and a good move saw Healy picking up the ball and playing it out wide right to Marcus Hall who played it back into Healy who saw his shot deflected just wide of the left hand post.

Hillfield's Russell got free on the left hand side of the box and played in Hamilton who saw his shot across goal go wide of the right hand post and it was Russell again who was involved in the home sides next chance. Russell nearly got number five for Hillfield after he cut in from the right hand side and unleashed a powerful shot which just came off the top of the bar.

Hutchie first effort of the second half came from a free kick but Devin Burnside blasted his attempt high and wide of the left hand post.

It was not long before the home team were on the attack again and Russell saw a weak shot taken comfortably by the busy Page in the Hutchie goal and he was in action again not long after when he produced a super save to push Healy's shot round the post for a corner. Page punched the ball clear from the resulting corner.

Russell who seemed to be every where saw his goal bound shot from the left side of the box deflected by Smith for a Hillfield corner. Hamilton whipped in the corner to the back post which was played back into the box by Healy but Francis put his header just over the bar.

Hillfield were in total control at this stage with Hutchie just treading water to keep themselves alive in this match.

The visitors were being pretty much restricted to shots from distance but they got a lifeline in the 68th minutes when Adam Forrest met the ball at the back post from a cross and blasted the ball home from only a couple of the yards out even though Blair Springhall on the post tried his best to keep the ball out but had no chance.

This visibly lifted Hutchie and two minutes later they had a great opportunity to get another one back from the spot after the Hutchie striker was brought down in the box. Williamson did not let his team mates down as he stepped up and found the right hand corner of the goal, sending Donaldson the wrong way.

The home side looked a little shell shocked at the quick two goals conceded and could have conceded again if not for a smart save from Donaldson from Burnside's shot. Hutchie came close again when a free kick played in by Burnside to the back post was met by Forrest but his header was well saved by Page.

Hillfield started to apply pressure on Hutchie again and Russell tested Page from the right hand side of the box but the Hutchie number one saved well with his feet diverting the ball for a corner. The corner was met by the head of Francis but he could not generate enough power to trouble the Hutchie keeper who collected the ball comfortably.

The 84th minute saw Healy who had been a thorn in Hutchie's side all game latch onto a long ball from Asam and he finished with aplomb finding the right hand corner to put this game beyond Hutchie and on a personnel level collect his hat-trick.

To give Hutchie credit they kept going and it was the visitors who finished off the scoring in this game with a fine finish by Mitchell who found the top right hand corner with a wonderful strike from around 25 yards out.

The referee brought the game to an end and Hillfield came away worthy winners but credit to Hutchie for making a game of it.

Inverkeithing Hillfield Swifts
Hutchison Vale FC
1. James Donaldson
2. Marcus Hall
3. David McNamara
4. Alisdair Wallace
5. Mark Higgins
6. Aidan McGuire
7. Daryl Healy
8. Mohammed (Yousaf) Asam
9. Scott Russell
10. Brodie Hamilton
11. Blair Springhall
12. Euan Aitken
13. Cameron Cook
14. John Francis
15. Ryan Barry
1. Scott Page
2. Ryan Hutchison
3. Daniel Smith
4. Adam Forrest
5. Frankie John Bee
6. Dean Robertson
7. William Kerr
8. Aron Mitchell
9. Jonathan Grotlin
10. Devin Burnside
11. Craig Williamson
12. Joseph Oluwatobi Wuya
13. Chris Thompson
Star Player
Inverkeithing Hillfield Swifts
Hutchison Vale FC
Daryl Healy - Scoring a hat-rick topped of a great days work for Daryl who scared the living day lights out of the Hutchie back line every time he got on the ball. What an engine this lad has as he never stopped running the whole game and was willing to create chances for his team mates as well as look to get on the score sheet.
Scott Page in the Hutchie goal stopped the score line being a lot more in Hillfield's favour with many good saves .
Magic Moment
Inverkeithing Hillfield Swifts
Hutchison Vale FC
Hillfield's fifth goal from Daryl Healy which gave him his well deserved match hat-trick.
Craig Williamson's clinical penalty low into the corner and sending the keeper the other way.
Club Views
Inverkeithing Hillfield Swifts
Hutchison Vale FC
Stevie, coach of Inverkeithing Hillfield Swifts, said: "We started slow but they worked hard to get into the game. Hutchie were on top for the first 10 minutes but then we came and played and started to mix it with them and got our heads in front. Pace up front is a big asset in this game and we have that and we proved that by going 4-0 up by half time. Hutchie did not lie down and credit it to them they got their goals back and at 4-2 they looked like they could get something from the game but our fifth goal took a bit of sting out of them. The boys worked hard today and overall it was a good game played in good spirit. "
Colin Cameron, coach of Hutchison Vale Fc, said: "We just were not up for it today. After a good start in the opening 15 minutes but after we conceded a couple of goals and the heads went down. 4-0 at half time and your struggling already but we did the best we could in the second half but did not have enough to get back into it. A bad day at the office."
Tweet
Published in South East Region
Tagged under