Tynecastle Shott down in quarter final 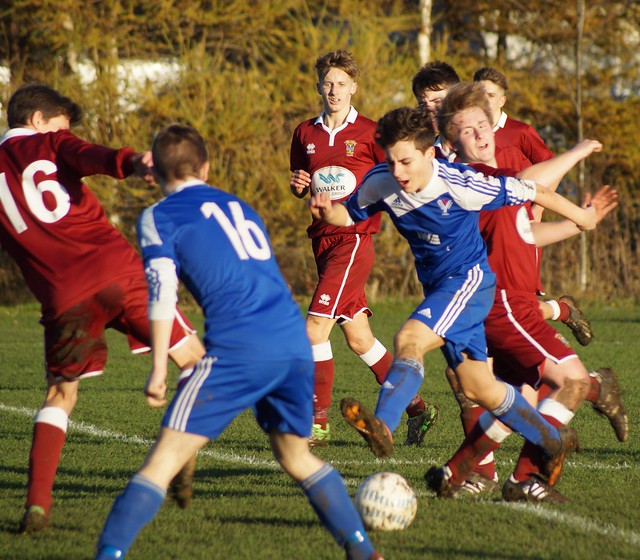 On a afternoon more reminiscent of a summers day than mid November, Tynecastle Fc crashed out of the South East Region Cup with a whimper following a brace from Dale Baxter for Shott's who thoroughly deserved their win.

Tynecastle and Shott's were looking to book themselves a semi final spot after getting to the quarters with a 5-3 win against Leith Athletic and a 3-2 extra time triumph over Currie Star respectively.

The home side got the game underway on a rather heavy pitch after the over night rain and should have found themselves ahead only after two minutes when Ryan Ritchie drove down the right hand side and saw his cross met by the head of Ben Gardinar which crashed of the bar and Thomas Patterson blasted the rebound well over the bar from six yards.

Shott's looked shocked by Tynecastle's intense start to the game but slowly started to get a foothold in the game which saw Dale Baxter drive down the left side and cut inside to see his powerful shot cleared. A Shott's free kick 25 yards out then saw a bit of panic in the Tynie box when the ball spiraled high into the air off Baxter's head to see Declan Muir meet the ball but was adjudged to be off side.

Shott's were coming onto their game now and Kerr Fraser played in a delightful ball into the box but there were no takers for the visitors and he then followed it up with a well hit shot from 10 yards which saw Keiron Ross in the Tynecastle goal have to react sharply to save with his feet.

A Shott's corner taken by Baxter was just begging for someone to stick a foot out as the ball traveled across the front of the Tynecastle goal but the Shott's front men just could not react quickly enough.

After all the Shott's pressure it was Tynecastle who nearly took the lead sixteen minutes into the half when after some great play down the left, Thomas Patterson whipped a ball into the box which was controlled beautifully by Richard Kerr 16 yards out.  Kerr was very unlucky as he spun and shot in one movement only to see his rocket of a shot hit the right had side juncture of the bar and post.

A Tynecastle free kick 30 yards out driven in by Patterson caused a bit confusion for Davidson between the Shott's sticks when he lost track off the flight of the ball as Alexander Hutchison ran across him but he gathered his senses to clear the ball. 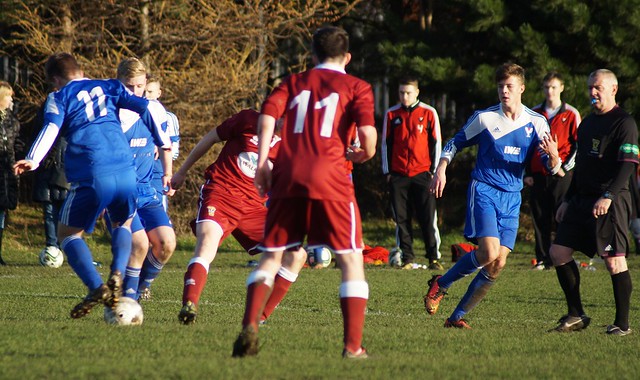 Baxter who was a thorn in Tynecastle's side all game so far went down in the box but his penalty claim was turned away as no one seemed to be around him when he hit the ground.

Both keepers were tested at their near posts when Shott's Davidson got down well to save a low shot from Dominic Foulkes and his opposite number had to get down sharpish to smother Gary McGeouch effort.

Tynecastle had Hutchison to thank for not falling behind in this cup tie when he cleared off the line when Fraser's lopping header over the advancing Ross was goal bound.

Shott's were in control and forced several throw in's in succession with Paul Hughes receiving the ball from one on the edge of the box but sliced his shot 18 yards out. Shott's next opportunity came when Baxter who was every where for Shott's played in Luke Brown who was brought down unceremoniously for what looked a certain penalty. The referee deemed the initial touch came out side the box and awarded a free kick 18 yards out but Baxter's effort was taken by Ross at the second attempt.

Shott's pressure deservedly paid off in the last minute of the half when that man again Baxter picked up the ball 25 yards out down the left and drove into the box to show great composure to slot the ball into the right hand corner past the helpless Ross in Tynie's goal.

A great time to score and Tynie nearly doubled Shott's lead in added on time when Baxter played in a ferocious ball low across the box which was met by the Tynecastle defender, facing his own goal 6 yards out and was very fortunate to see the ball go inches wide of the right had post. 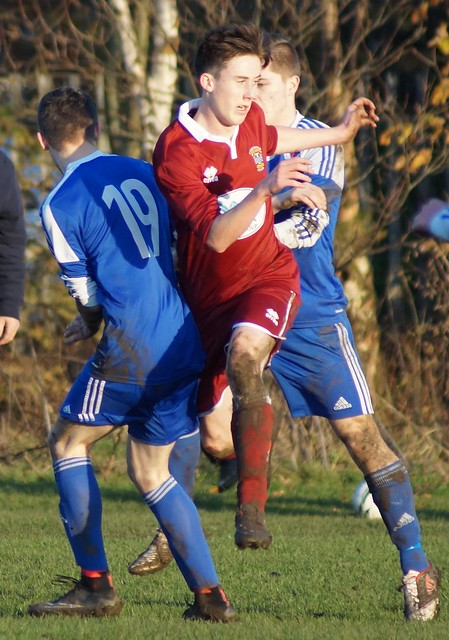 Shott's got this cup tie restarted after the break and Tynecastle were first to try their luck when Kerr shot from 25 yards went harmlessly wide of the left hand post and this was followed up by a Tynecastle free kick from the half way line when the ball was floated in but the Shott's defence cleared easily.

Baxter started off the second half as he ended the first and was not long before he had his first opportunity of the half when Shott's played a ball in behind Tynecastle rear guard and it was a foot race between Baxter and Ross in the Tynie goal which Ross just won to clear up field.

The first real chance of the half came in the 55th minute when Tynecastle's Luke Dwyer found himself in on goal and hit a great strike which Davidson saved brilliantly to tip round the post for a corner.

Shott's were bossing the midfield and showed good composure on the ball and Fraser came close to extending Shott's lead with a lovely chipped shot that had Ross in the Tynie goal beaten all hands up but the ball just went inches over the bar.

The home side had a few flurries up field and Patterson fancied his chances from distance but Davidson punched clear to see the ball land at Jake Hughes feet but his strike went wide. Tynie's next effort came from a corner on the left and Patterson delivered a long ball to the back post but went out harmlessly.

Tynie tried to get the ball down and play football but their passing game let them down time after time with Shott's picking them off at every opportunity. Shott's came close again when a high ball in by Fraser was met by Ryan Welsh but his header was well saved by Ross and it was Fraser who tried his luck again but his shot from distance carried no real threat for the Tynecastle keeper.

Tynecastle were under the cosh and were starting to loose their discipline in midfield which saw two quick bookings for the home side with Lloyd Livingstone see yellow for a late challenge from behind on Muir and Hutchison following him minutes later for a rash challenge on Welsh. 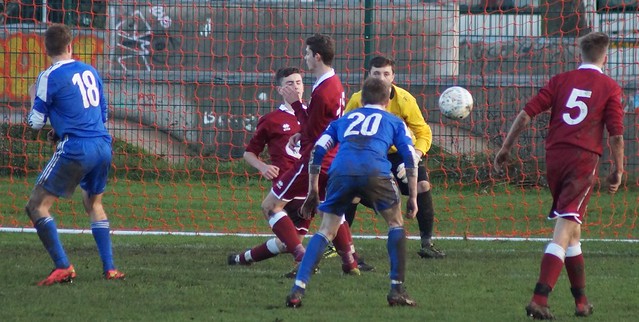 Dwyer combined well with Patterson who saw his strike just go wide of the keepers right hand post but this was one of few chances Tynecastle created upfront with most of their work done in a defensive capacity.

Shott's found themselves down to ten men when the hard working Robbie Mclean went down with severe cramp and was taken off for treatment. Even down to ten Shott's still pushed forward and Shaun O'Donnell found himself one on one with the Tynecastle keeper but Ross stayed big and snuffed out the chance. Mclean had to be replaced as he was unfit to continue so Shott's were back to full compliment.

Shott's Baxter who had been outstanding the whole game looked to create every time he had the ball and this led to him winning a penalty with 13 minutes left when Tynecastle's Ritchie chopped him down from behind in the box. Baxter got up, composed himself and slotted home the perfect penalty into the keepers right hand corner and it had to be as Ross guessed the correct way but still could not get close to Baxter's spot kick.

Tynecastle did have the ball in the Shott's net when Livingstone played in Hughes who was given off side before scoring.

The men from the West finished the game on top as they had been for three quarters of the game and Welsh, Baxter and Muir all created opportunities late on but could not covert to further increase their lead.

The referee brought this cup tie to an end and Shott's deservedly look forward to the semi final draw for the South East Region Cup.

Tynecastle Fc
Shotts YMCA Reds
1. James Davidson
3. Shaun O'Donnell
5. Ryan Welsh
6. Patrick Duffy
7. Dylan Noonan
8. Andrew Patterson
9. Sandy Robertson
10. Luke Brown
11. Kerr Fraser
12. Gary McGeouch
14. Paul hughes
15. Robbie Mclean
16. Dylan King
17. Aron Taylor
18. Declan Muir
19. Kieran McColgan
20. Dale Baxter
1. Kieran Ross
2. Aaron Nugent
3. Jake Hughes
4. Alexander Hutchison
5. Kacper Korpalski
6. Jamie Stewart
7. Daryl Henderson
8. Luke Dwyer
9. Ben Gardiner
10. Bradley Fergie
11. Dominic Foulkes
12. Lloyd Livingston
14. Richard Kerr
15. Matthew McKenzie
16. Ryan Ritchie
18. Hamish Levein
19. Thomas Patterson
Star Player
Tynecastle Fc
Shotts YMCA Reds
Alexander Hutchison worked tirelessly at the back and showed good leadership and communication. Showed good awareness to clear off the line to stop his team going behind in the first half.
Dale Baxter wins this hands down after fantastic all round performance. He was a thorn in Tynecastle's side all game with his movement, strength and was a goal threat every time he got on the ball. This was no more when he opened the scoring for Shott's and went onto win a score the penalty that sealed his team's win.
Magic Moment
Tynecastle Fc
Shotts YMCA Reds
Luke Dwyer treating the Shott's player for severe cramp was a nice moment.
Dale Baxter showing great composure in the last minute of the first half to score the opener for Shott's.
Club Views
Tynecastle Fc
Shotts YMCA Reds
Dean Summers, coach of Tynecastle, said: "I thought the first five minutes we should have been two or three up then shots just came at us for the next 85 minutes. To be honest the right team won but if we took our chances we could have had the game settled but Shott's were up for it and took their chances and we could not argue with the result."
Dale Baxter, Shott's player and goal scorer, said: "I thought the team started strong pressing their back four which caused them problems trying to play out from the back. We got the goal and we played strongly throughout the game then we got the penalty. On a personnel level I was pleased with my performance and it was great to get the goals."
Tweet
Published in South East Region
Tagged under